- May 19, 2020
An international group of labor unions has filed a complaint alleging “systemic” and “rampant” sexual harassment at McDonald’s restaurants around the globe, arguing the corporate fast food giant has ignored the problem for years.
The complaint was filed with the Organization for Economic Cooperation and Development (OECD) on Monday by the International Union of Food Workers (IUF), which said McDonald’s had allowed a
“sexual harassment crisis” to persist in restaurants all over the world, including in the US, Brazil, Australia, France, the UK, Chile and Colombia, among other countries.
“McDonald's workers have sounded the alarm about sexual harassment and gender-based violence for years, but a company with a culture rotten from the top has failed to take meaningful action to address the problem,” Sue Longley, IUF’s general secretary, said in a statement.
Running down a litany of examples of harassment – including offers of promotion in exchange for sexual favors in Brazil, hidden cameras installed in a women’s changing room in France and indecent exposure and attempted rape in the US – the IUF says McDonald’s has repeatedly violated OECD rules governing multinational enterprises. The complaint also targets two European investment banks which together own holdings in the company worth $1.7 billion – Norges Bank and APG Asset Management – alleging that they have also bucked OECD guidelines, which require large shareholders to oversee responsible business conduct. 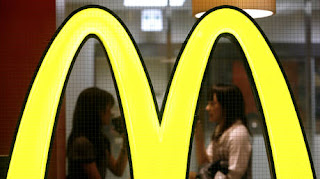 The group filed its grievance with regulators in the Netherlands instead of the US, where McDonald's is headquartered, arguing that because harassment “permeates the top ranks of corporate management,” their complaint would be handled by “unclean hands” in the States.
“Because McDonald's has neglected to act to create a safe workplace, the Dutch government should make use of this complaint to empower workers to effectively address the rampant harassment they face under the Golden Arches,” Longley said.
The complaint asks for no monetary compensation, seeking only to compel the company to negotiate and create a plan to crack down on harassment in its restaurants worldwide, according to Lance Compa, an international labor law specialist who addressed a press conference alongside the IUF on Monday.
“Mediation is the goal. It’s not a case of winning or losing, it’s about coming together and finding a joint solution to this problem,” Compa said, adding that while the complaint can’t force the company to change its ways, similar grievances have brought globe-spanning corporations to the table before.
The IUF is not the first to accuse McDonald’s of tolerating harassment. Last year, the Time’s Up legal defense fund – created to finance lawsuits brought against high-profile harassers – filed two dozen complaints against the company last year, while on the same day Brazilian prosecutors launched a probe into racism and sexual assault at the restaurant. Time’s Up also helped employees bring a separate class action suit against McDonald’s earlier this month seeking $500 million, alleging
“systemic sexual harassment.”