- May 10, 2020
Social distancing measures such as school closings, prohibiting public gatherings, and quarantine lockdowns need to last a minimum of three months to curtail overall death rates, according to a Harvard study that looked at lessons from the 1918 Spanish Flu.
The working paper, authored by Harvard macroeconomics professor Robert Barro, looked at data from across various cities in the United States during the 1918 Spanish Flu, also known as the Great Influenza Pandemic, to draw comparisons to the present COVID-19 pandemic.
Barro used three non-pharmaceutical interventions (NPIs) – school closures, ban on public gatherings, and quarantine/isolation measures – from 43 cities in the United States to make a prediction on how long a shutdown must last before the benefits outweigh the costs. 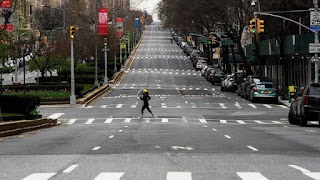 “Given the clear success in depressing the relative peak death rate, the likely reason that the NPIs implemented in 1918-1919 were ultimately not very successful in depressing overall deaths is that the NPIs were not maintained long enough,” Barro wrote.
Barro looked at data from 1918 which found that the mean durations of school closings and prohibitions of public gatherings only lasted 36 days while quarantine and isolation measures lasted an average of 18 days at the time.
“The lesson for the ongoing coronavirus pandemic in 2020 is that, to curtail overall deaths, the NPIs used have to be maintained for substantially longer than a few weeks. Most likely, 12 weeks work much better than 4-6 weeks,” Barro concluded.