- May 21, 2020
“The Last Dance” appears to have turned Michael Jordan’s most important teammate against him.
According to an ESPN Radio host, Scottie Pippen is “livid” and “so angry” with how he was portrayed in the Bulls docuseries that detailed the dynasty through Jordan’s eyes.
Jordan called Pippen selfish in Episode 2 for delaying ankle surgery until right before the 1997-98 season forcing him to miss the first couple of months during a bitter contract dispute with general manager Jerry Krause. Jordan also took a vague shot at Pippen’s struggles in Game 7 of the Bulls loss to the Pistons in the 1990 Eastern Conference final, which were due to a migraine.
“[Pippen] felt like up until the last few minutes of Game 6 against the Jazz [in the 1998 NBA Finals], it was just ’bash Scottie, bash Scottie, bash Scottie,’ ” David Kaplan said on his ESPN 1000 “Kap and Company” show in Chicago.
Pippen’s alleged feelings come a day after
Jordan was slammed by Horace Grant , who was a part of the team’s first three-peat.
“[He] puts this lie out that I was the source behind [Sam Smith’s “The Jordan Rules” book],” Grant said. “Sam and I have always been great friends. We’re still great friends. But the sanctity of that locker room, I would never put anything personal out there. The mere fact that Sam Smith was an investigative reporter. That he had to have two sources, two, to write a book, I guess. Why would MJ just point me out?
“It’s only a grudge, man. I’m telling you, it was only a grudge. And I think he proved that during this so-called documentary. When if you say something about him, he’s going to cut you off, he’s going to try to destroy your character.” 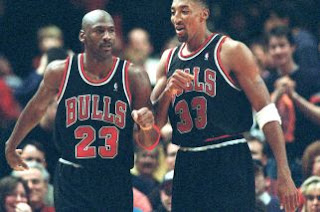